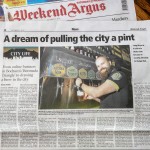 Profile on Beerhouse and Randolf in the Weekend Argus 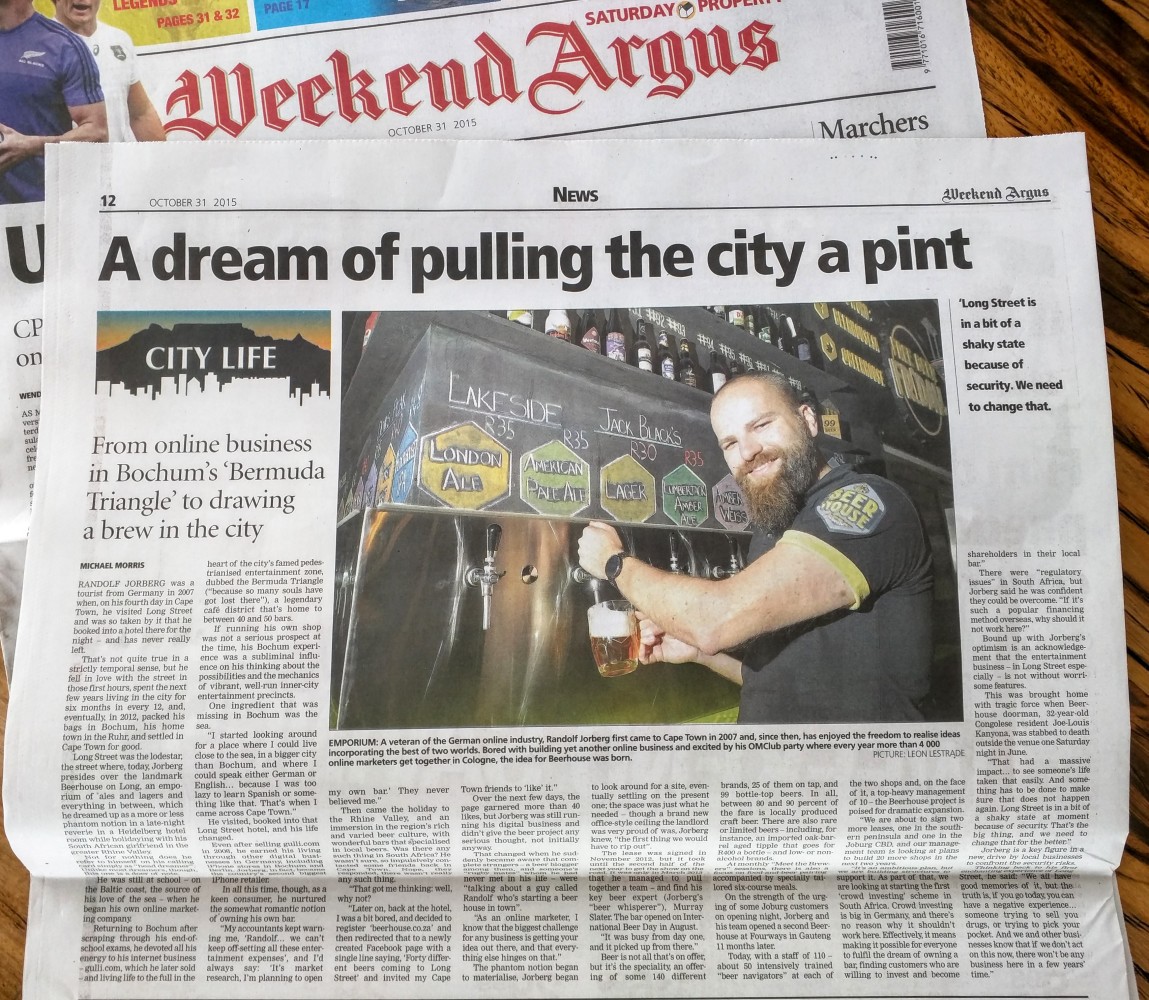 It’s not often, that a journalist manages to listen and ‘get you’ in a way, that his writing describes you better than you could do yourself. But Michael Morris is one of these skilled writers and his article appeared in the Weekend Argus on 31st of October.

A dream of pulling the city a pint

EMPORIUM: A veteran of the German online industry, Randolf Jorberg first came to Cape Town in 2007 and, since then, has enjoyed the freedom to realise ideas incorporating the best of two worlds. Bored with building yet another online business and excited by his OMClub party where every year more than 4 000 online marketers get together in Cologne, the idea for Beerhouse was born.
That’s not quite true in a strictly temporal sense, but he fell in love with the street in those first hours, spent the next few years living in the city for six months in every 12, and, eventually, in 2012, packed his bags in Bochum, his home town in the Ruhr, and settled in Cape Town for good.
Long Street was the lodestar, the street where, today, Jorberg presides over the landmark Beerhouse on Long, an emporium of ales and lagers and everything in between, which he dreamed up as a more or less phantom notion in a late-night reverie in a Heidelberg hotel room while holidaying with his South African girlfriend in the greater Rhine Valley. Not for nothing does he refer to himself on his calling card simply as “head dreamer”. Unlike most dreamers, though, this one is a doer of note.
He was still at school – on the Baltic coast, the source of his love of the sea – when he began his own online marketing company.
Returning to Bochum after scraping through his end-ofschool exams, he devoted all his energy to his internet business – gulli.com, which he later sold – and living life to the full in the heart of the city’s famed pedestrianised entertainment zone, dubbed the Bermuda Triangle (“because so many souls have got lost there”), a legendary café district that’s home to between 40 and 50 bars. If running his own shop was not a serious prospect at the time, his Bochum experience was a subliminal influence on his thinking about the possibilities and the mechanics of vibrant, well-run inner-city entertainment precincts. One ingredient that was missing in Bochum was the sea. “I started looking around for a place where I could live close to the sea, in a bigger city than Bochum, and where I could speak either German or English… because I was too lazy to learn Spanish or something like that. That’s when I came across Cape Town.” He visited, booked into that Long Street hotel, and his life changed.

Even after selling gulli.com in 2008, he earned his living through other digital businesses in Germany, including iPhone stores in Bochum and Berlin. Jorberg, in fact, became the country’s second biggest iPhone retailer. In all this time, though, as a keen consumer, he nurtured the somewhat romantic notion of owning his own bar. “My accountants kept warning me, ‘ Randolf… we can’t keep off-setting all these entertainment expenses’, and I’d always say: ‘ It’s market research, I’m planning to open my own bar.’ They never believed me.” Then came the holiday to the Rhine Valley, and an immersion in the region’s rich and varied beer culture, with wonderful bars that specialised in local beers. Was there any such thing in South Africa? He wasn’t sure, so impulsively contacted some friends back in Cape Town. Nope, they responded, there wasn’t really any such thing. “That got me thinking: well, why not?
“Later on, back at the hotel, I was a bit bored, and decided to register ‘beerhouse.co.za’ and then redirected that to a newly created Facebook page with a single line saying, ‘Forty different beers coming to Long Street’ and invited my Cape Town friends to ‘like’ it.” Over the next few days, the page garnered more than 40 likes, but Jorberg was still running his digital business and didn’t give the beer project any serious thought, not initially anyway. That changed when he suddenly became aware that complete strangers – a beer blogger among them, and someone’s “rugby mates” whom he had never met in his life – were “talking about a guy called Randolf who’s starting a beer house in town”. “As an online marketer, I know that the biggest challenge for any business is getting your idea out there, and that everything else hinges on that.” The phantom notion began to materialise, Jorberg began to look around for a site, eventually settling on the present one; the space was just what he needed – though a brand new office-style ceiling the landlord was very proud of was, Jorberg knew, “the first thing we would have to rip out”.
The lease was signed in November 2012, but it took until the second half of the next year to get the show on the road. It was only in March 2013 that he managed to pull together a team – and find his key beer expert (Jorberg’s “beer whisperer”), Murray Slater. The bar opened on International Beer Day in August. “It was busy from day one, and it picked up from there.”
Beer is not all that’s on offer, but it’s the speciality, an offering of some 140 different brands, 25 of them on tap, and 99 bottle- top beers. In all, between 80 and 90 percent of the fare is locally produced craft beer. There are also rare or limited beers – including, for instance, an imported oak-barrel aged tipple that goes for R400 a bottle – and low- or nonalcohol brands. At monthly “Meet the Brewers” sessions, there is also a focus on food-and-beer pairing accompanied by specially tailored six-course meals.
On the strength of the urging of some Joburg customers on opening night, Jorberg and his team opened a second Beerhouse at Fourways in Gauteng 11 months later. Today, with a staff of 110 – about 50 intensively trained “beer navigators” at each of the two shops and, on the face of it, a top-heavy management of 10 – the Beerhouse project is poised for dramatic expansion. “We are about to sign two more leases, one in the southern peninsula and one in the Joburg CBD, and our management team is looking at plans to build 20 more shops in the next two years. “It’s an ambitious plan, but we are building structures to support it. As part of that, we are looking at starting the first ‘crowd investing’ scheme in South Africa. Crowd investing is big in Germany, and there’s no reason why it shouldn’t work here. Effectively, it means making it possible for everyone to fulfil the dream of owning a bar, finding customers who are willing to invest and become shareholders in their local bar.” There were “regulatory issues” in South Africa, but Jorberg said he was confident they could be overcome. “If it’s such a popular financing method overseas, why should it not work here?” Bound up with Jorberg’s optimism is an acknowledgement that the entertainment business – in Long Street especially – is not without worrisome features.
This was brought home with tragic force when Beerhouse doorman, 32- year- old Congolese resident Joe-Louis Kanyona, was stabbed to death outside the venue one Saturday night in June. “That had a massive impact… to see someone’s life taken that easily. And something has to be done to make sure that does not happen again. Long Street is in a bit of a shaky state at moment because of security. That’s the big thing, and we need to change that for the better.”
Jorberg is a key figure in a new drive by local businesses to confront the security risks. Thinking back to his first enchanting experience of Long Street, he said: “We all have good memories of it, but the truth is, if you go today, you can have a negative experience… someone trying to sell you drugs, or trying to pick your pocket. And we and other businesses know that if we don’t act on this now, there won’t be any business here in a few years’ time.”