Archives For how to NOT 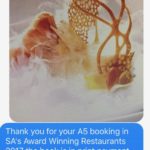 Is RASA sending this SMS only to me?

As much as I was happy seeing my Beerhouse win your Top100 Rosetta Award of Service Excellence in 2016 and I appreciated your telephone call today, that we will be listed as one of 100 SA’s Award Winning Restaurants 2017 in your ‘reputable guidebook’, we need to talk about something: 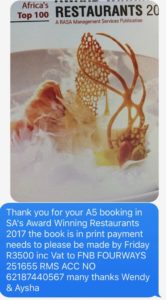 I do not appreciate receiving this image via text/MMS message earlier today and I wonder, if I’m alone or if there are other restauranteurs, who received something similar? I do not ever book any print advertising and know, that no one in my company does. Imagine, if I had just forwarded this order confirmation to our finance department for payment and this payment reminder was sent to dozen or maybe even hundreds of restauranteurs, that you got in your database?

After I posted this message on my Facebook and tagged the RASA and their frontwomen in it, it didn’t take her 5 minutes to call me and threaten with legal consequences, if I didn’t immediately delete the picture. What followed was a conversation with RASA’s legal counsel who could also only threaten to sue for damages due to reputational damages. This surprises me, as I’m only showing the communication you are sending out and explain the context. It seems, that I hit a nerve somewhere?

So my question stands: did anyone else receive similar order confirmations with demand for payment from RASA / Restaurant Association of South Africa without placing an order? Feel free to comment below or send me a confidential message 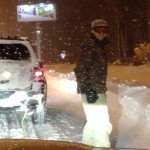 Snowboarding on the Highway at 84 km/h in Kiev, Ukraine

When the whole city gets covered in snow and chaos and all sightseeing and party plans fall apart, it’s time for a time out – on the empty highway.

When 50cm snow falls and the country stands still someone needs to get moving. 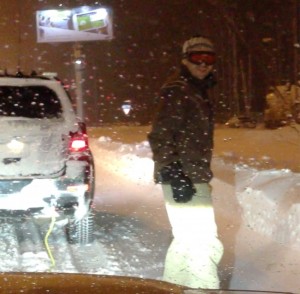 Disclaimer: I write this as the owner of weather.co.za – a privately held weather forecasting site that has definite plans to extend it’s offerings to launch and produce it’s own weather forecasts and warning data very soon. The weather bill can and will be used by the South African Weather Service (SAWS) and it’s heavily connected private sister-company Weather Intelligence Systems  (Pty) Ltd. to fight off private competition as my site could become. 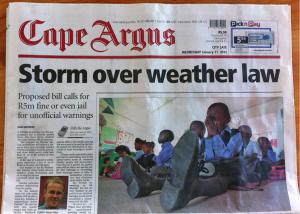 Less than a week before the final hearings, the proposed SA weather service amendment bill, 2011 does finally make some headlines and gets attention by the DA MP Gareth Morgan, FW De Clerk Foundation and many other affected parties.

“Only the Weather Service may issue severe weather-related warnings over South Africa in order to ensure that there is a single authoritative voice in this regard.”

is what the South African Weather Service Act already says since 2001. As if this questionable decision, that lacks any legally binding definition of a ‘severe weather-related warning’ isn’t enough the new amendment is now supposed to add the following section 30A that reads:

As the SA weather service amendment bill is so outrageous and wrong, I just sent the following letter to the parliament, just in time for the public hearing, that I will attend January 17 and 18:

I heavily object to the new weather service amendment bill and ask parliament to review essential clauses to understand what this bill does to any legitimate competitor to South African Weather Service (SAWS) or their licensing customers:

The offenses clause and clause 28A in the Bill needs to be removed and I ask parliament to rethink the current policy on “one single authoritative voice” in regards to severe weather warnings. 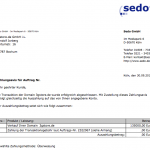 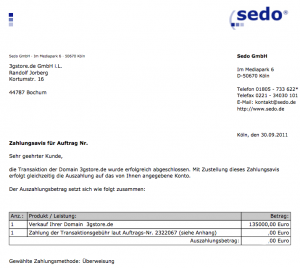 This news was supposed to break with a (german languaged) press release by Sedo, but as a domainer blog broke the news I don’t want to be quiet: The iPhone store 3Gstore.de that I started in 2008 was sold to Avazu group’s Teebik Inc for 135.000 € (ca. 180.000 US$) through the broker house Sedo.

The blog was saying we sold only a domain name, but it was all the existing assets of the former 3Gstore.de GmbH. We even opened the worlds first iphone only brick and mortar store here in Germany and generated a turnover of more than 15 million Euro in total. 3Gstore.de still has more than 2000 unique daily visitors and transaction, even though we announced the sale and shut down two months ago. In short: we didn’t sell a domain name, but a whole online shop / brand / business with a complete domain-portfolio (3G.de, generic and typo-domains) organic search traffic and lots of customers that are eager to return and order again…

There are lots of stories about all the successes and failures I experienced in the last three years, but I can honestly say: it was an awesome experiencing to start an e-commerce business from scratch, learn ALL aspects of starting and growing  an online business from zero to 1 million € monthly turnover and I’ll be glad if the next three years have a bit less excitement for me… 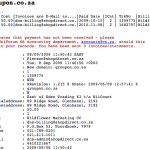 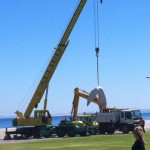 It was this morning that I read via bradley on twitter that a Whale was currently removed from the Sea Point promenade. I was on the scene a few minutes later and could shoot the following incredible photos: 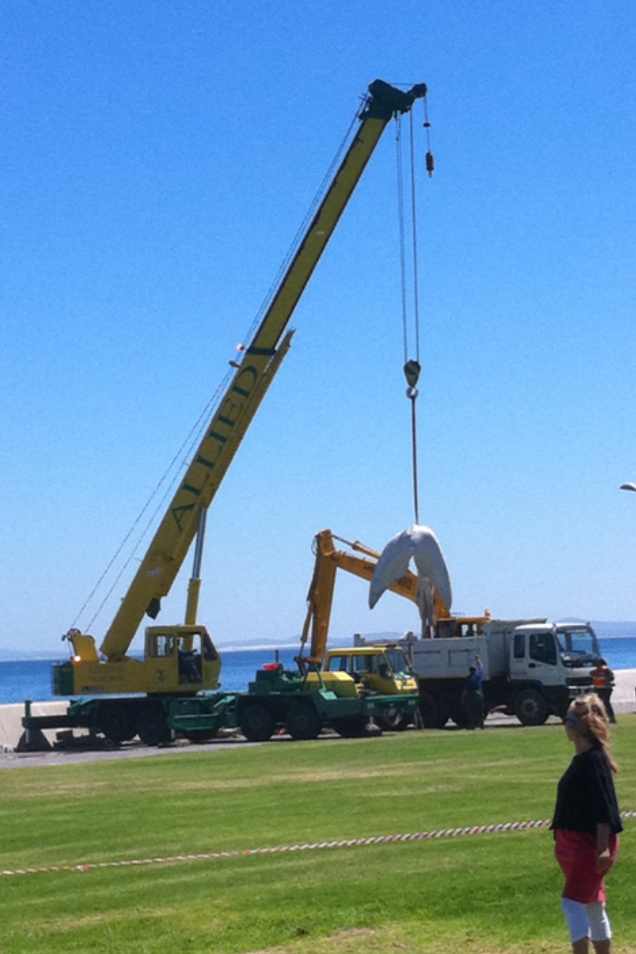 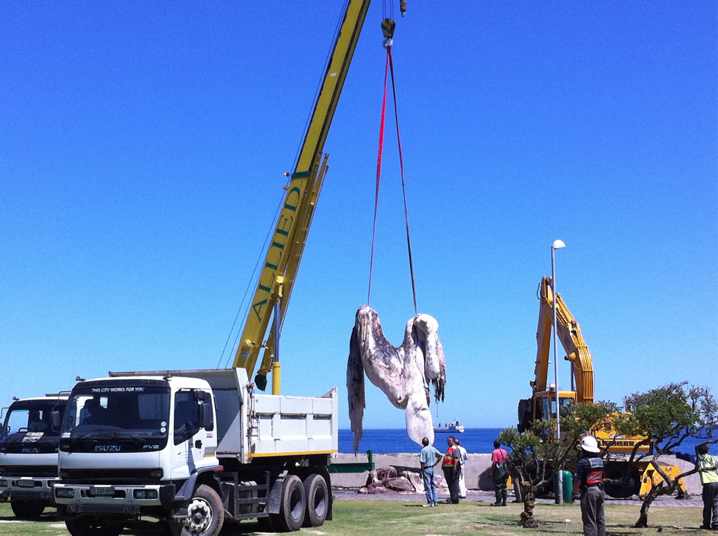 I spoke to an officer in charge and he told me the whale is a Southern right whale, weighting ‘only’ 15 tons and he had between 9-10 meters in length, before he broke into three pieces when they initially tried lifting him out of the water. The whale was dead for a couple of days already, which you could certainly smell, when you were close as we were…

If Matt Cutts says that the Googlebomb Problem was solved using a new algorythm that must be correct. After all it THE Matt Cutts from all-beloved Search-Engine Giant Google! Or is it possible that they lie to you? Why do they still claim that everything on Google’s result pages is still ordered by algorythms? Because it’s still done the manual way, they still don’t get the ‘smaller’ language-specific Googlebombs like the case of ‘völlige inkompetenz‘ (complete incompetence in german) that ranks the austrian politician Karl-Heinz Grasser #1 when searching for it with Google:

funny enough: when the safe search is activated the politicians webpage does not appear in the Google results. Does it mean that Google thinks of this Politician’s (empty) homepage as an adult site?

There were too many lies about Googlebombing-Algos on the internet – hope that stops somehow soon. Google just started manually modifying their rankings on a massive scale and tries to hide that from their observers.

On a side note: the most impressive changes in the search rankings due to the manual anti googlebomb ‘algo’ was caused for the term ‘exit‘. Before Google shuffled the results the Top 3 spots were occupied by disney.com, Google and Yahoo, who’re linked by tens of thousand adult sites with an ‘exit’ button on their index page but that is gone by now.

As we’re Registerfly customers ourself and we’re not able to get our Domains out of their account I wanted to share a quick find for a quick laugh on the current Registerfly-case: In some published court documents you find this gem:

Hey – how simply can’t run a business properly, if you spend all your time spending money! 😉
If you haven’t got the whole story: Read this at the excellent customer-blog Registerflies or here. BTW: Registerfly isn’t that big as they appear – 63% of their domains are actually .info domains that were given away heavily discounted or even for free.
The real reason for all the chaos and the court actions seems to be a non-working 50/50 partnership between John Naruszewicz and Kevin Medina. Now John is trying to squeeze Kevin out of their company by publishing all this dirt – the whole document is a real how-to-NOT business documentary…

When writing about the stalkertrack myspace tracker scam I didn’t speak about the service in itself, as users are promised access to it, but will never ever receive it from stalkertrack.com. But the whole issue of profile trackers at Myspace is indeed interesting and worth an extra post. At the Washington Post Security Fix Brian Krebs covered that a few months ago, but only gave a vague idea about the technical details and possibilities on myspace.

There are two different kind of myspace tracking services out there. Those who go with the Myspace TOS and those who don’t. The legitimate services (like profilesnitch.com) can only show the data that every homepage owner can gather from his visitors: the visitors location (via ip), time, operating system, etc. The latter ones can show you the profile nickname, picture and even the registered email address of every myspace user visiting your profile on top! This surely is a serious privacy leakage that myspace needs to fix permanently. The illegitimate services are only stopped from working, as Myspace manually deactivates them, as their hide-and-seek continues. Using custom hosted scripts (available via ebay (1, 2) and other scripts that are not publicly sold like “Project Tenyer” the script used by stalkertrack.com, you can circumvent this limitation and host the scripts yourself. END_OF_DOCUMENT_TOKEN_TO_BE_REPLACED